Federal bureaucracy is hazardous to your health

Federal healthcare regulations with their attendant bureaucracies are supposed to facilitate patients getting the medical care they need when they need it. Sadly, bureaucracy does the exact opposite: it reduces access to care and can lead to needless deaths.

Creating federal rules and regulations costs lots of money. The first round of instructions for the Affordable Care Act (ACA) required more than 2000 pages in the Federal Register, with more than 10,516,000 words eight times the number of words in the Bible. To implement and oversee federal mandates requires bureaucracy and bureaucrats. This too costs money, such as $1.7 trillion for the ACA.

Spending by Washington on its bureaucracy is first dollar spent. Spending on care comes a distant second. Administrative jobs in healthcare have exploded while physician numbers haven't. as in evident in following graph. 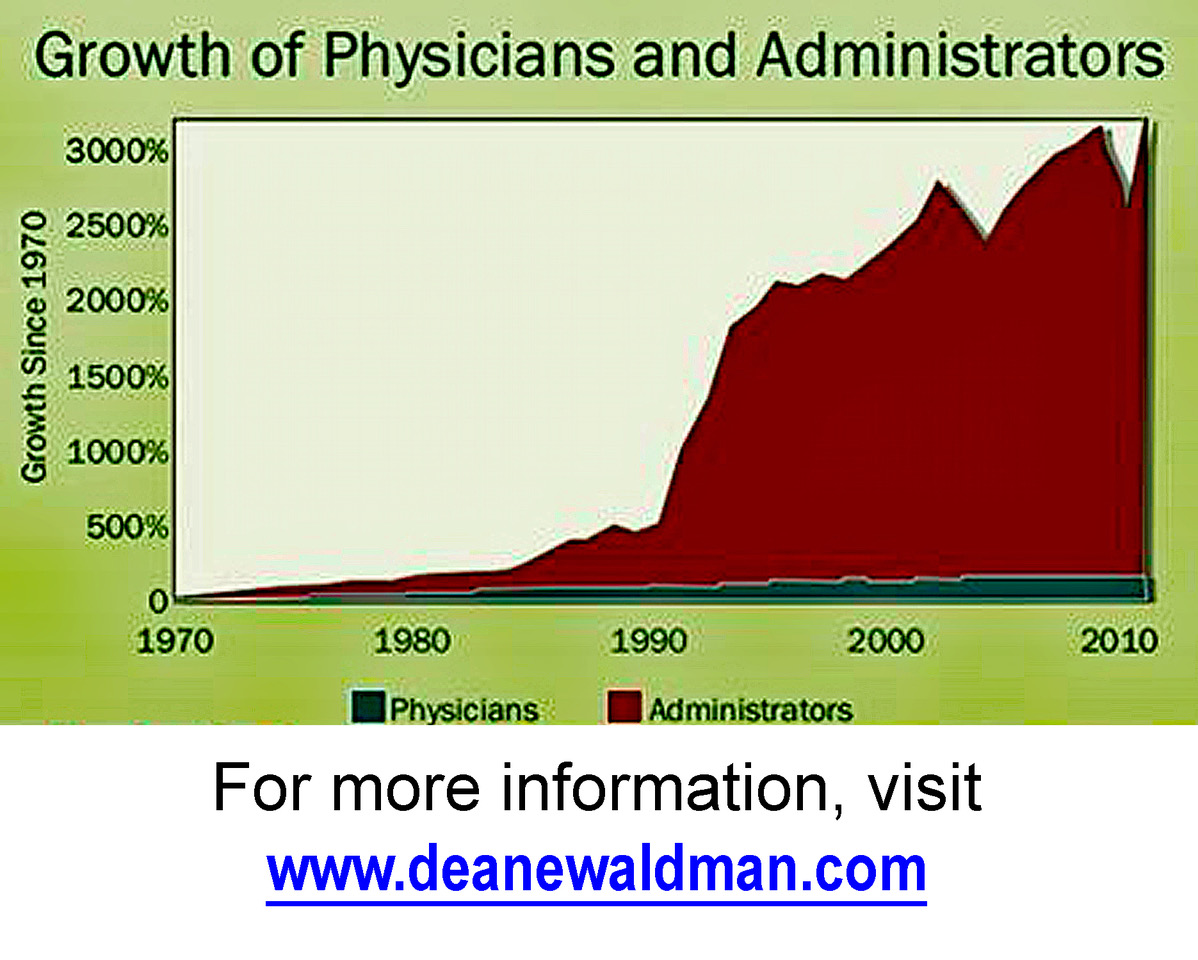 Between 1970 and 2010, the supply of physicians grew approximately 150 percent. During the same period, the number of healthcare administrators increased more than 3000 percent! Spending on bureaucrats had to increase commensurately.

The above graph was developed by Physicians for a National Health Plan (PNHP). It is the height of irony that an organization dedicated to single payer healthcare, i.e., PNHP, should make the best case for why we shouldn't have the federal bureaucracy control healthcare.

Note that the graph above ends in 2010 before the further, massive increase in federal bureaucracy due to the Affordable Care Act. To understand the scope of the ACA bureaucracy and to recognize that the word "massive" is not hyperbole, observe the organizational flow chart below of the ACA, based on a four-month study of the ACA's structure by Texas Representative Kevin Brady.

Keep in mind that every element in the chart below represents thousands of healthcare bureaucrats and billions of healthcare dollars expended not on patients. 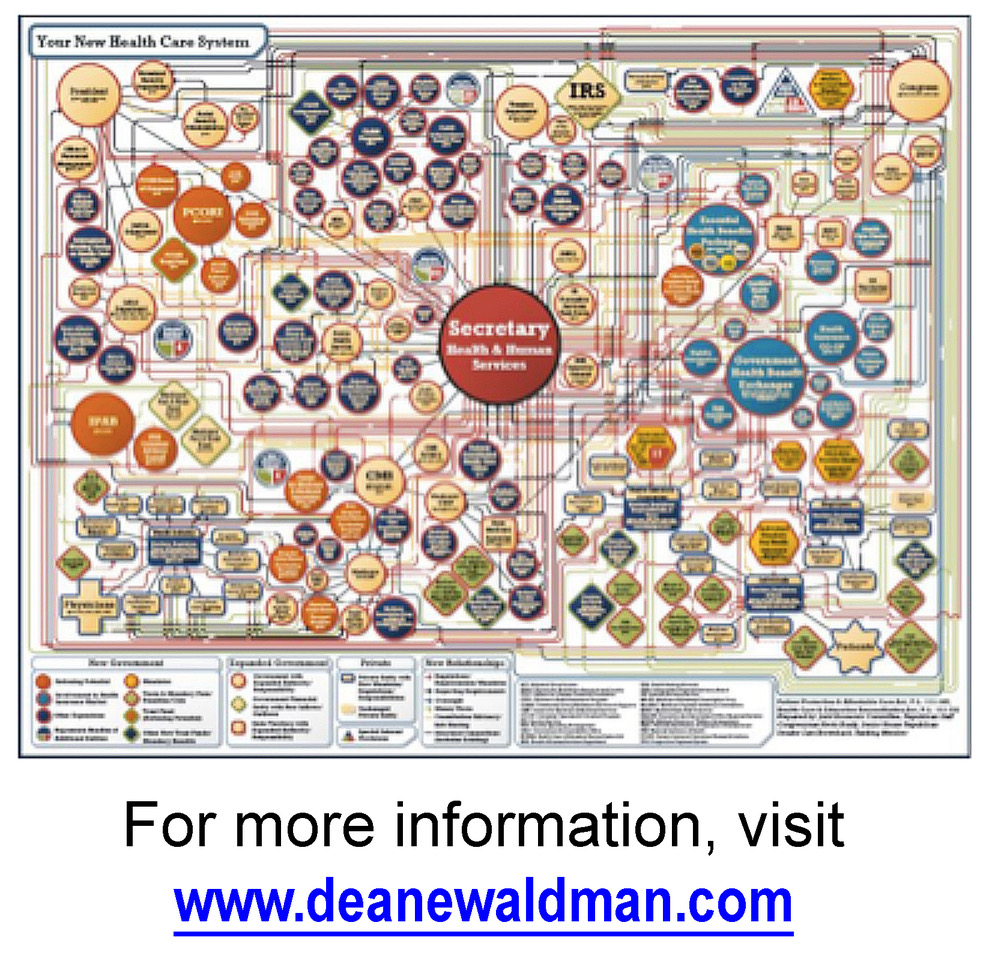 Money used for bureaucracy is not available to pay for patient care. This has been called "bureaucratic diversion" and is the primary reason why Americans are spending more and more on healthcare (the system), while getting less and less care.

After Illinois expanded Medicaid and thus, its bureaucracy in May 2013, 752 Illinois Medicaid enrollees died avoidably, needlessly. Though these patients had medically treatable conditions, bureaucratic diversion prevented access to care in time to save their lives. Too few providers were willing to accept the low Medicaid reimbursement schedules and so, wait times for care increased to the point of "death-by-queueing."

Bureaucratic diversion applies equally to dentists. In 2007, a 12-year old Maryland boy named Deamonte Driver died of a dental cavity because no local pediatric dentists would accept Medicaid insurance. His eventual hospitalization and death cost more than $250,000. Both the cost and death could have been avoided by a procedure that costs less than $100.

Since 2007, Medicaid reimbursement schedules to providers have gone down as more money was needed for expanded bureaucracy and new regulations. Thus, the problem of insufficient access to care has gotten worse. By 2012, roughly one third of U.S. doctors do not accept Medicaid patients. In Texas, less than half of the physicians do.

Federal healthcare bureaucracy is supposed to reduce costs and facilitate care. In fact, bureaucracy increases spending and diverts "healthcare" dollars to itself. This reduces access to care. Americans die who could have been saved.

Federal bureaucracy is hazardous to your health.

Federal healthcare regulations with their attendant bureaucracies are supposed to facilitate patients getting the medical care they need when they need it.

Professor Emeritus of Pediatrics, Pathology and Decision Science, and holds the "Consumer Advocate" position on the Board of Directors of the New Mexico Health Insurance Exchange, and Adjunct Scholar (Healthcare) for the Rio Grande Foundation.