Washington spends money we don't have...
and our children suffer

President Obama started his healthcare “reform” saying that U.S. spending on healthcare was “unsustainable; we have to cut spending.”

Yet, Obamacare increases spending by $2.6 trillion. This is money we simply do not have. 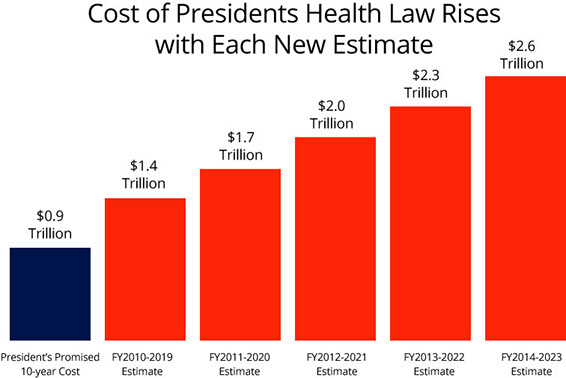 MONEY WE DON'T HAVE

In order to pay for all the new bureaucracy and regulators, Congress has done three things we don’t want them to do:

1) They used money to pay their henchmen bureaucrats that is desperately needed for health care providers.

2) They diverted money away from other vital services that we need along with health care.

3) Worst of all, they borrowed lots and lots of money, adding to our already bloated debt. As a result, our children will suffer in the future, trying to pay off debts that we are incurring now.

Data from 2018 indicate the average American family of four spent $28,166 for healthcare costs, mostly for insurance premiums. For healthy families, that is literally wasted expenditure. For perspective, $28,166 represents 45 percent of 2018 median household income. Nearly half of their hard-earned dollars went to insurance companies, before they paid taxes or the mortgage, or put food on the table.

Former President Obama’s spending, mainly on his healthcare bureaucracy, achieved an unenviable record. For the first time in our history, in 2013, the U.S. national debt ($16.7 trillion) exceeded U.S. GDP ($16.6 trillion). In simple terms, we owe more than we are producing. This is the very definition of unsustainable.

Next Page: Fixes that Fail: Obamacare

Obamacare did not make healthcare sick. The U.S. healthcare system was dysfunctional long before Mr. Obama took office. However, his “reform” made things even worse!

MONEY WE DON'T HAVE

Get the
new book:

"Curing the Cancer in U.S. Healthcare"

Dr. Waldman's new
eye-opening book lays bare the disaster that has befallen both patients and doctors over the last 50 years due to government and administrative involvement into health care. Today close to 50% of healthcare spending goes NOT to doctors to pay for care, but to administrators who manage the miles of red tape introduced by ever increasing number of government regulations.

Dr. Deane Waldman was Chief of Pediatric Cardiology at: The Children’s Hospital of San Diego, The University of Chicago, and The University of New Mexico. He has seen the insides and outside of our floundering medical care systems. At present, Dr. Waldman is Distinguished Senior Fellow for Healthcare Policy at Texas Public Policy Foundation. His proposal for StatesCare has the potential to revolutionize healthcare in the U.S. and save us from the imminent imminent collapse.